Happy Thanksgiving! Well, let’s get started on this new journey and new direction my blog will take. I have yet to change my subtitle, “Life with my 7th Generation Accord” to something more pertinent to the TL. A new cover photo is in order as well. I call this post, “When it all started…(2nd Edition)” since my story of purchasing the Accord was, “When it all started...” I wanted to keep things a little consistent. So, here’s how it all started with the TL:

It’s November 16th, 2013 and my friend Jouhl came along with me to fly to Sherman Oaks, CA (in the LA area) to pick up my TL at Center Acura. I’ve searched for days online to find the perfect fourth generation TL equipped with a 6-speed manual. There were very few in the entire country and even fewer within my southwest region. A statistic I read showed that only 8% of TLs were manufactured with a manual. (Makes you wonder why Acura even bothered) In the midst of my search, I found only two with a 6-speed manual in California. None in Arizona, New Mexico or Colorado. Only one was listed in Texas, however that car had been run pretty hard. For the two in California, one was a Certified Pre-Owned example with 24,440 miles from the Sherman Oaks Acura dealership. The other was heavily modified with 50,000 miles by a Buick dealer. Even though the price was much higher than I planed on, I chose to target the Certified Pre-Owned one. Here’s the American Airline ticket for the flight we were to board for 5:40am.

But disaster! We overslept and despite a rushed drive to the airport in El Paso, we missed the flight. We had two options from there. Catch a 7:30 flight to Dallas where there would be a two hour layover and then take another to LA, or wait until 12:40pm for the next direct flight to LA. I chose the 12:40 one. I had my doubts in my decision, but it worked out in the end. So, we kicked back for about 6hrs at the El Paso International airport.

I was anxious since flying gives me the hebe-jebes, and I was worried that someone over in Sherman Oaks could walk into the dealership and still buy the TL if they had the cash. I also was uneasy about choosing this car that I hadn’t seen in person. I only had photos to go by online and what the sales guy told me. I wasn’t bound to this car as I didn’t put a deposit down or electronically sign any papers, but I really didn’t want this trip and money to be wasted.

Surprisingly, those 6hours didn’t seem that long and we eventually were aboard and off in the air! 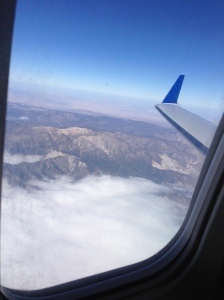 Most of the entertainment on the flight was observing the birds-eye view of the landscape.

We landed in LA around 1:40pm. Quite a bit behind schedule, but we finally made it nevertheless. I was still anxious since we basically were dropped in the midst of one of the largest cities in the county, and we had no transportation and no understanding of the area. 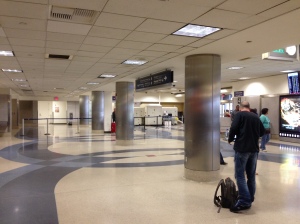 Jouhl suggested we get a snack and drink at Starbucks before challenging anything else. It calmed me down quite a bit.

We arrived! I felt a little more relaxed since we were there. I snapped this rather crummy photo while walking. Jouhl was already ready to charge into the dealership. 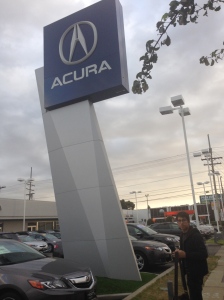 Once inside I met up with Fred, the salesperson, who I had been in contact with days before heading out from New Mexico. He kindly pulled the TL out from the back for me to look over. Once I laid my eyes on it, I knew it was the one! Glad I made the move. Except for a small dent on the roof, this was one mint example that had been used very lightly. It had all the keys, original tires, owner’s manuals, and a clean 1 owner CarFax report. It was originally leased and serviced from Center Acura. This was quite a difference from when I purchased my Accord. Then I was planning out all that I’d have to repair and upgrade. Not this time…

After a test drive, bartering, and signing all the papers, the keys were officially handed to me four hours later! 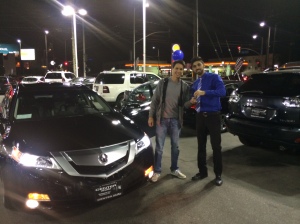 Here’s one Fred took of Jouhl and I. 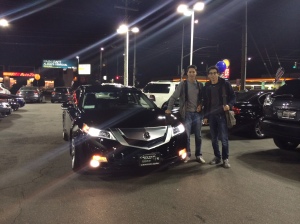 The mileage when I officially took the keys was at 24,446. This is the lowest mileage vehicle I’ve ever purchased! 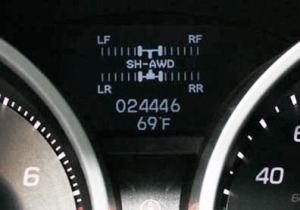 From there, we immediately wanted to start the trail back to New Mexico. From LA to Las Cruces would be a total of 778 miles and 11 hours. Despite feeling quite weary, we drove that same night a few hours due east to a hotel in Indio, CA where we would spend the night. From there it would be a straight shot to home.

I woke up the next morning and had quite a treat to see when looked out the window.

Here, I stopped just outside of Blythe, CA for the first fill up for the TL. With an estimated EPA rating of 19MPG city and 27MPG highway, I was going to have to just accept the fact that this would be a little more thirsty than either my Accord or RSX I used to have. At this fill up, I calculated 27MPG. Not bad considering it includes some driving in LA traffic. It gave me hope I may be able to achieve 30 if I do some steady highway driving with the cruise control on. 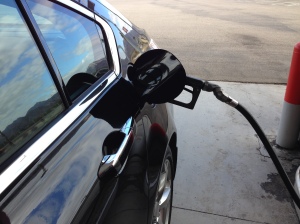 While filling up, it gave me some time to walk around and survey the car up close and personal.

I kept the receipt for the first fill up. 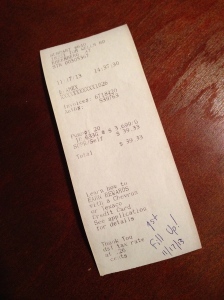 We stopped briefly in Phoenix where me met up with my friend Tyson so he could see the TL and we could take some pix before sunset. Good to be a part of the Acura family again. Here’s a photo of Tyson’s friend, Paul with his gorgeous 2013 TL SH-AWD.

We then called Tyson over to be a part of the group photo. His Silver Moon ILX sure looks sleek at dusk. 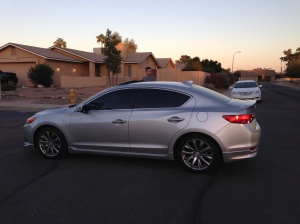 One of my favorite details to Paul’s ride is this white sticker of Grumpy Cat. Love it! 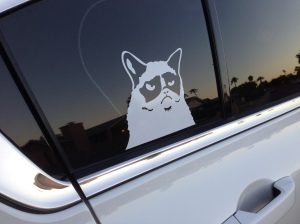 If you look closely, you can see his custom plate that finishes off the sticker nicely! 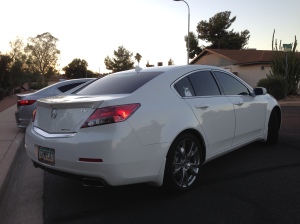 From there, Jouhl and I pretty much made a straight shot to home. From Phoenix, it was 6hrs to Las Cruces.

After getting home around 1:30am, Charlie had to inspect and approve my purchase. (no lifting of legs was allowed though)

And that’s how I obtained ownership of the TL. Thanks for coming along for the ride!

6 thoughts on “When it all started…(2nd Edition)”

This site uses Akismet to reduce spam. Learn how your comment data is processed.